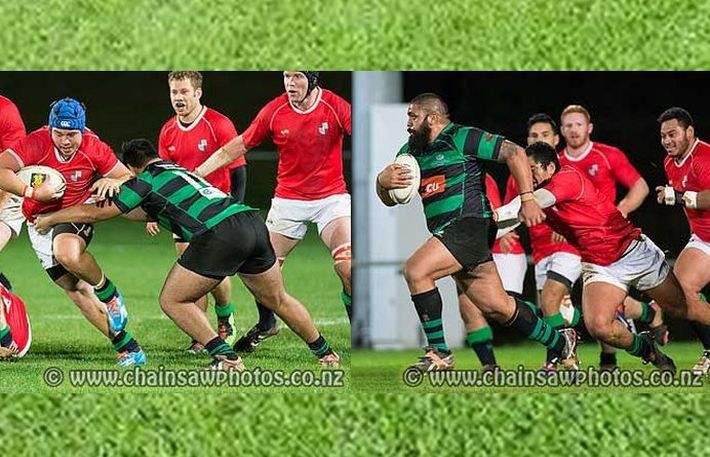 Above: Valentine Meachen (MSP) and Ben  Tupuola (Wainuiomata) were the two No. 8s when their sides met under lights at Jerry Collins Stadium and drew 30-30 this week in 2014.

In association with Lovelocks Sports Bar on Bond Street in Wellington, some highlights from this week in Wellington club rugby history are below.

1963: Oriental beat St Pat’s Old Boys 17-12 after leading 17-3 at halftime, rounding off a successful 75th jubilee weekend for the club. Off the field, Oriental’s celebrations include a parade and dinner that is attended by 95-year-old co-founder G.S. Hill and 1913 All Black Charlie Gillespie who is the guest speaker.

1960: In the Petone Rugby Football Club’s 75th jubilee match against Poneke, played at the Petone Recreation Ground, the home side are beaten 14-6 by Poneke. The red and blacks lead 11-6 at halftime

2008: Wellington Lions No. 8 Alex Tulou and Samoan international first five-eighth Fa’atonu Fili produce the magic that sees MSP snatch a thrilling 25-22 win over Northern United on their Old Timers’ day at Evans Bay Park. Tulou scores two tries in a matter of minutes early in the second half, both off the shoulder off Fili, and Fili kicks both conversions as well as two late penalties that help turn the game around and earn the victory for MSP after they fought back from a 15-0 deficit at halftime. MSP go on to win this year’s Swindale Shield.

1985: Paremata-Plimmerton are on their way with their maiden Swindale Shield win, beating Titahi Bay 19-18 in a nail-biter. Fullback Tony Saunders kicks a last-gasp penalty. Other matches today are also close, with Avalon and Poneke drawing 6-6, MSP edging Wests 18-15 and WCOB defeating Ories 18-12 on penalties.

2001: An edge of the seat thriller as MSP beat Tawa 27-25. MSP lead 21-3 at the turnaround, but Tawa hit back and they take a 25-24 lead after Junior Togia scores. MSP work their way up field and wing James Reilly snaps the winning dropped goal with time almost up.

2014: The Johnsonville Hawks swoop on the Ories Magpies at the Polo Ground today, kicking a late penalty to win the game 19-16 and grabbing their maiden Swindale Shield win of the season and first Premier rugby victory in eight years. Johnsonville brreak a 16-16 deadlock to win the game with time almost up, winning the Ash Pointon Cup off Ories and breaking a 23-game losing streak dating back to their 20-17 win over Ories at the Polo Ground in April 2006.

1989: Ories continue their winning ways, beating MSP 19-3 in front of a monster Polo Ground crowd of 3,500. Elsewhere, University score their winning try from a controversial forward pass in their 13-9 victory over Porirua – Titahi Bay United.