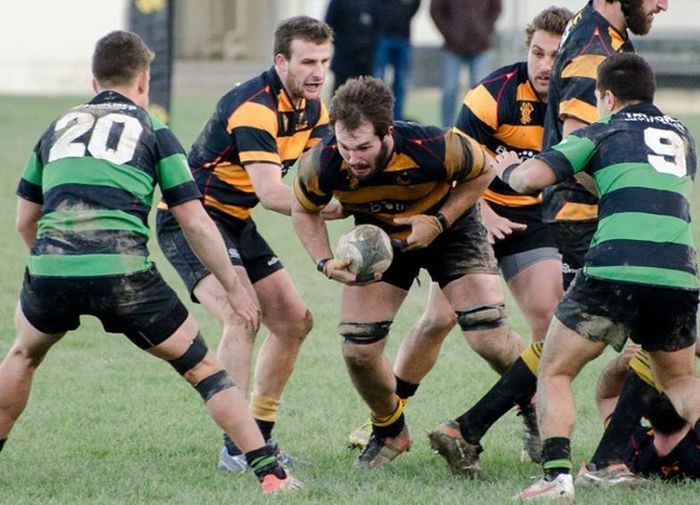 Alex Dalzell missed much of the Swindale Shield with a broken thumb. Since returning from that setback in May the loose forward has impressed with his aggressive intensity and productive work rate.

Its little surprise Dalzell is enjoying playing for the Wellington Axemen. He is a member of a famous North Canterbury rugby family. His grandfather was Nelson Dalzell a member of the 1953-54 All Blacks tour of the UK and France. Nelson's wife was the sister of Canterbury and All Black team-mate Allan Elsom.

Nelson's son and Alex's dad Anthony played for Canterbury as a loose forward in the early 1980s while a son in law Graeme Higginson was an All Black lock in the 1980s.  Another son in law, Braeden Whitelock, played for Manawatu and the New Zealand Colts. Braeden is the father of the Whitelock's. Alex's brother Hamish is presently a member of the New Zealand Under-20s competing at the IRB Junior World Championships in Manchester.

"I guess you could say rugby runs in the family. I was brought up on a sheep and beef farm and have pretty fond memories of playing rugby in the frost in bare feet," Alex laughs.

In pursuit of a superior education and greater rugby opportunities, Dalzell shifted to Christchurch and attended St. Andrew's College where he spent two years in the First XV.

"I played for the First XV in 2010 and 2011. There were lots of highlights which included playing with my brother and Richie Mo'unga, both of whom were pretty classy. In 2010 we drew with St. Kentigern College in the Presbyterian Quadrangular final. It was great to achieve that result against such a powerhouse team," Alex recalls.

"My first two years were in the Colts. We won the competition which was awesome. In my third year I suffered a shoulder injury and missed most of the season. Last year I played for the seniors and we were knocked out in the semi's which was disappointing, but we beat University on their home ground which was nice," Alex says.

Dalzell attended IRANZ at a time rugby and career prospects dictated a move to the capital. During the day he works for Tranzit Coachlines in an operations capacity.

"I was looking for something a bit different and really liked what the Axemen had to offer. It's a great club. I have a fulltime job and juggling rugby and work is an exciting challenge," Alex says.

Wellington have won nine out of 14 games this season. They were third in the Swindale Shield and despite a first-round Jubilee Cup loss to Wainuiomata (14-15) Dalzell is optimistic Wellington can crack the Top Four.

"We're a sharp team with good coaches. I think we can match it with all the teams, but it will be tough. Old Boys University play a very fast game, but they got beaten by Poneke which shows they’re vulnerable. Ories are very physical and Tawa threw a lot at us," Alex says.

"Adam is a really passionate club man and outspoken leader prop. Peni is quiet off the field, but is a big threat on it while Sam has been really helpful for me since I joined the club," Alex says.

In his spare time Alex's hobbies include squash, diving and being outdoors.

This Saturday, Alex and the Axemen play the Upper Hutt Rams at Maidstone Park. The Rams are on a role and took down Old Boys University in their Jubilee Cup opener last weekend. Wellington beat the Rams 40-32 when they met in the first round in April.