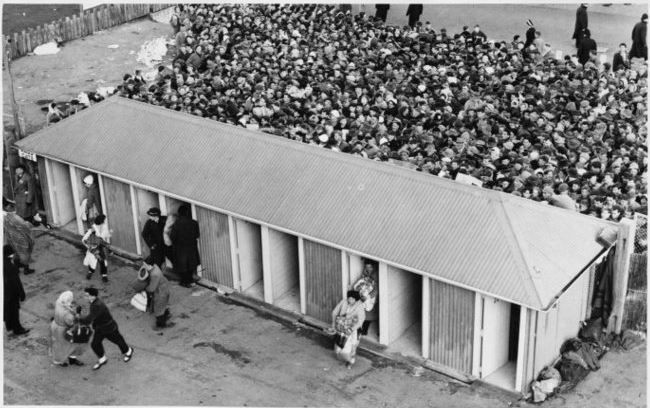 They came in their droves.

Wellington's largest rugby crowd, then and now, estimated on the day at 60,000 but revised down to 59,000, packed the old Athletic Park to watch the All Blacks defeat the touring British Isles 11-8 and go two nil up in their four-Test series.

Just a fortnight earlier a crowd of 47,000 had witnessed the Wellington Lions go down gallantly 6-21 to the British Lions. The All Blacks had also won the first Test in Dunedin - but only just 18-17 - so this was going to be big.

The Lions came south for the Test from Palmerston North fresh off a midweek victory, putting the afterburners on to score four tries in quick succession in the first half? to ease to a 26-6 win over a combined Manawatu-Horowhenua combination. ?In the lead-up to the Wellington Test the tourists enjoyed a day off with a game of golf at the Shandon Golf Club.

Memories were still fresh of the All Blacks' gutsy 6-3 over the tourists in Wellington in 1950, when two New Zealand players, prop Johnny Simpson and midfielder and captain Ron Elvidge, were forced from the field injured. Simpson limped off with a torn knee after 15 minutes while Elvidge departed just before halftime clutching his collarbone and nursing a gash to his cheek, only returning later to play a token roving role in the backs - and subsequently scoring the match winning try to a roaring reception.

Nine years on, this Test was sold out well in advance. Official attendance figures were given at 53,000, Athletic Park's capacity. As was tradition, hundreds of people camped out overnight on the footpath and many thousands more arrived early in the morning to get their favourite vantage point - ?usually on the far side of the ground where the famous Western Bank was located and regular patrons were known simply as ‘Bankers'.? Gates closed at 11.00 am and all was in readiness as Test match fever gripped the air.

Outside was still teeming with some 15,000 people hoping, straining to get in. Frustrated, many left disappointed. Others got their wish when gates were forced off their hinges and holes in fences got prised open allowing several thousand to stream in and join those already inside. Many probably couldn't see a thing but it was being there that mattered most.

On the field Wellington and Poneke wing Ralph Caulton scored two tries on debut and the All Blacks trailed 6-8 late in the match, before Waikato fullback Don Clarke took a gap and dived over to score the match winner in the dying minutes.

Off the field the traffic officers went to work, closing all exit routes in crowd control and traffic management 1950s style. They towed 35 cars parked on driveways and blocking exit routes.

Extra trams and buses were warmed up and waiting outside the ground; legal car parking for 800 vehicles had been made available at the Winter Show Buildings. The people streamed out of the ground happy that afternoon.