Wellington v Taranaki 1953: the high point of a golden year 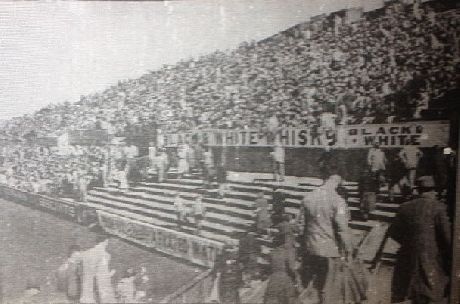 Above: Athletic Park's Western Bank filling up fast 10 minutes after gates have opened at noon for a 3.00 pm kick-off between Wellington and Taranaki. Photo: EP 29/8/1953

1953 was a golden year in Wellington.? The new queen was on the throne, Sir Edmund Hillary had just scaled Mt Everest and rugby was on a high.

In a heady seven-week period throughout August and September, Wellington won the Ranfurly Shield off Waikato and defended it five times before losing it to Canterbury at the end of the season.

On the back of a memorable club rugby season, in which a star-studded University team swept to the Jubilee Cup title playing breath-taking rugby, there was magic in the air when Wellington defended the Log o' Wood against Southland (22-6), East Coast (42-0), Otago (9-3), Taranaki (26-3) and Auckland (23-6).

At the time Wellington had several players who were current or future All Blacks, headlined by the team's star player, left wing Ron Jarden.? Jarden had scored all the points in the match in which Wellington won the shield off Waikato (9-6) and he was a regular on the score-sheet in the other games, including scoring six tries against East Coast.

On 29 August Wellington welcomed Taranaki on to Athletic Park, amid a carnival-like atmosphere.? Taranaki were expected to provide a tough challenge. They had drawn with previous holders Waikato 3-3 the week prior to Wellington's successful challenge and, in a formidable forwards display, had beaten Wellington 9-6 earlier in the season in a mud-splattered affair at Hawera.

It was also 40 years since Taranaki had held the Shield, Wellington being the team that had ended their last reign back in 1914.

A confident Taranaki arrived in Wellington in a bus displaying a replica of Ferdinand the Bull and their supporters poured into the capital off two special overnight trains to join the street parade on the morning of the match.

The pre-match build-up was stirring. Being Old Timers' Day, many of Wellington's 247 former players were in attendance, including legends Billy Wallace and Teddy Roberts who led an on-field demonstration of old-school rugby tactics. Visiting fans replied by parading a pair of Ferdinands around the field. Closer inspection by those on the Western Bank revealed two sets of human legs under the hides of the two Ferdinands.

The Dominion the following Monday morning summed up the match as it unfolded. "The result of Saturday's Ranfurly Shield game was virtually decided when the Wellington forwards asserted their mastery over Taranaki in the first spell. The speedy backline had a feast of ball and treated the crowd to spectacular rugby."

Wellington's fired up pack was led by blindside flanker Don McIntosh, No. 8 Graham Mexted and teenaged lock Dave Harker. Halfback Vince Bevan was a livewire link between forwards and backs. Jarden pounced to score an early try, and then he kicked and chased to set up a try second five-eighth Brian Fitzpatrick. Bevan scored a try and Jarden converted and Wellington took a commanding 18-0 lead into halftime.

Taranaki fought back bravely throughout the second spell, but a try to Wellington wing Brian Battell after a searing break by centre Jim Fitzgerald put Wellington ahead 26-0. Taranaki could only answer with a lone dropped goal.

With nine points against Taranaki, Jarden brought his season tally for Wellington to 105, made up of 15 tries, 12 conversions and 12 penalties.? Jarden had scored 14 tries for University in Wellington club rugby earlier in the season and he went on to score 15 tries in 22 matches for the All Blacks on their end of year tour to Britain and France.

The Dominion summed the win up: "The heights to which Wellington can rise when the conditions enable the players to exploit the great pace to the utmost were adequately demonstrated on Saturday when Taranaki were overwhelmed.

"It was not surprising that the pace slackened in the second spell, but the first spell was a thriller with Wellington dominating play all the way."

Wellington and Taranaki's great rivalry continued well into the 1960s when they fought out several nail-biting matches. Two such games in 1964 and 1965 were Taranaki Ranfurly Shield defences, after they had come to Wellington in 1963 and lifted the Log o' Wood from Wellington just seven days after Wellington had won it off Auckland.

In 1964, after three successful defences, Wellington was determined to re-claim the shield. Taranaki led 3-0 late in the match, but Wellington halfback Brian Coulter broke through to score what seemed certain to be the winning try - only for Taranaki centre and former Wellington player Neil Wolfe to snatch the ball away from Coulter at the last moment.

The following year, Wellington famously beat the Springboks 20-6 and then set its sights on winning the shield a few weeks later. But, playing against a strong wind, Taranaki held Wellington to 3-3 at halftime and then sailed to an11-3 win.