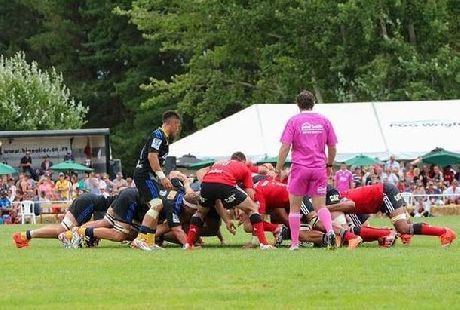 Above: The Hurricanes and the Crusaders packing down in pre-season play in Eketahuna recently. The Crusaders are playing to win their eighth Super Rugby title and their first since 2008 when the 20th season kicks off this weekend, while the Hurricanes are searching for their maiden competition win.?

2015 is certainly the last year of an era within New Zealand rugby.?

Not only the last year of Super Rugby within its current format but also the expected final season for many experienced and well known players within the New Zealand scene as it is predicted many of the old guard, faces we have become oh so familiar with, will announce retirements and overseas adventures after the World Cup later in the year.

Bearing that in mind, this year’s Super Rugby season is not only important with World Cup selection offered as a carrot for performance, but also the personal motivation to perform in their last seasons for franchises they have served for many years.

While there will be a touch of sadness with so many great players lost to the game, it is also an exciting period as we look forward to the fresh faces and how they will make their mark in the years to come.

Right now however, it is time for the here and now and for me personally I am greatly looking forward to the New Zealand conference.

The Blues just cannot seem to cut a break at the moment. The pre-season has been dominated with peripheral issues which has to be distracting and is far from ideal preparation for the coming season.

Still, they can boast an All Black laden pack and an incredibly talented backline. What excites me about this Blues team is that they finally have a quality first five-eighth in Ihaia West.

West is inexperienced at this level but I believe his style of play is tailor made for this Blues team and he has the ability to unleash this Blues backline behind a forward pack which should provide enough ball and territory to work with. His working relationship with Bryn Hall will be one to keep an eye on as this could be the makings of a pairing which could serve the Blues, and New Zealand, for years to come.

For the long suffering Blues fans, this year shapes as an important one, particularly for their coach. I cannot see John Kirwan surviving another season if another mid table finish is served up.

Player to watch – Tevita Li. Those who watched the recent Under 20 World Cup will know what I am talking about. If you did not, you are in for a treat.

The Chiefs have built a formidable squad for this season with a number of high profile signings and in terms of TAB odds are ranked as a pre-season favourite for the title.

This really does shape as a pivotal year for Aaron Cruden, their impressive five eighth. With the return of Dan Carter and the versatility of Beauden Barrett and Colin Slade, Cruden needs a solid Super Rugby season to ensure his spot on the plane to England later in the year. With the long term injury to Tawera Kerr-Barlow, Augustine Pulu will have the inside running at halfback which in my view is a good thing for Cruden with his accurate and quick pass along with a dynamic midfield outside him, it is all in his favour. A little more luck on the injury front as opposed to last season and it is difficult not to see the Chiefs featuring at the pointy end of the season.

Player to watch – There are two players I am looking forward to seeing. Seta Tamanivalu was the player of the year from last year’s ITM cup and if he has the same impact at Super Rugby level then look out! Also, Damien McKenzie was a star in the Under 20 World Cup last season and is another to look out for as he takes the next step in his promising career.

Once again, the Crusaders look the goods and will no doubt feature again in the finals and are my personal favourite to win the title.

The tight five has a quality look to it along with the depth to see out the season and the loose forwards speak for themselves.

Dan Carter’s fitness and ability to see out the season is one talking point, if he does then I am in no doubt the Crusaders will be there or there bouts. In Colin Slade they have a quality back up and the return of Robbie Fruean to the centres provides a good mix perhaps lacking at times last season.

I can’t help but feel this is a pivotal season for Israel Dagg. Often maligned for his form at Super level he cannot afford another up and down season with the likes of Ben Smith and Charles Piutau playing consistent football from the back.

The Crusaders will be up there, again.

Player to watch – Codie Taylor. A young, dynamic and powerful hooker, I feel it is only a matter of time before he achieves higher honours.?

The Highlanders had a memorable 2014, achieving their first playoff appearance in 12 years and playing an attractive brand of Rugby along the way.

The challenge will be replicating this feat while having to endure significant personal change from the 2014 squad to this year and smacks a little of having to start over again.

The loss of Jarred Hoeta I feel is a major for this team and I am not sure they have recruited well, particularly at lock and without any big names the pack has a workman like look to it and may struggle this year.

However the same could have been said last season too and the rest is history. The backline has a potent and exciting look to it; particularly the back three and they will prove more than a handful for most.

Key player – Aaron Smith. His health and experience are imperative for this team to achieve the playoffs again this year.

Player to watch – Waisake Naholo was a star for taranaki in their title winning year in 2014 and forms a rather potent back three with Ben Smith and Patrick Osborne. Another to look out for is Dan Pryor, making his return to Super Rugby after a successful season with Northland. I love the way he plays and hope he can make the most of his second opportunity at this level.

The Hurricanes have made some changes for the 2015 season, most notable being the appointment of Chris Boyd as head coach with John Plumtree as his assistant.

Chris Boyd has come under fire recently after a dismal showing by the Wellington ITM cup side and will feel immediately under pressure to produce instant results.

The ace in the pack is Plumtree whose experience will be invaluable and together I am confident they can get this machine up and running in Wellington.

With practically an All Black backline and a number of All Black representatives in the pack, along with key members of the title winning Taranaki and Manawatu ITM squads and Championship finalists Hawke’s Bay the nucleus is certainly there to mount a considerable challenge for the title.

Consistency has always plagued this franchise and the biggest question mark will be whether the new coaching staff can solve this riddle.

Key player – Ma’a Nonu. Returning to his original franchise after several years on the outer, it is imperative that Nonu has an outstanding season.?

Player to watch – Nehe Milner-Skudder. An exciting and creative fullback, he looks a readymade replacement for Andre Taylor. Note – Watch the footwork.

So to sum it all up, obviously the Hurricanes will take out the conference, no, I’m joking, or am I? Sigh, I am quite unsure how it will all pan out so I am leaning on the safe option with the Chiefs and Crusaders to duke it out for first. I am leaning towards the Crusaders as I feel they have more depth in both the playmaking positions and in the front five. There is no certainty here as the other three teams could easily push themselves into mix but I am going with the Hurricanes to finish third, the Blues fourth and the Highlanders fifth.

So that wraps up my take on the New Zealand conference for Super Rugby in 2015, a bumper season awaits us all and I for one can’t wait to get it all underway.

As always, pre-season is not much of a gauge as to how teams will fare when the competition proper swings into gear. Nevertheless, the early season results of the New Zealand teams are handy to look at:

The opening matches of the season this weekend are: