A beer with an All Black: Andy Leslie 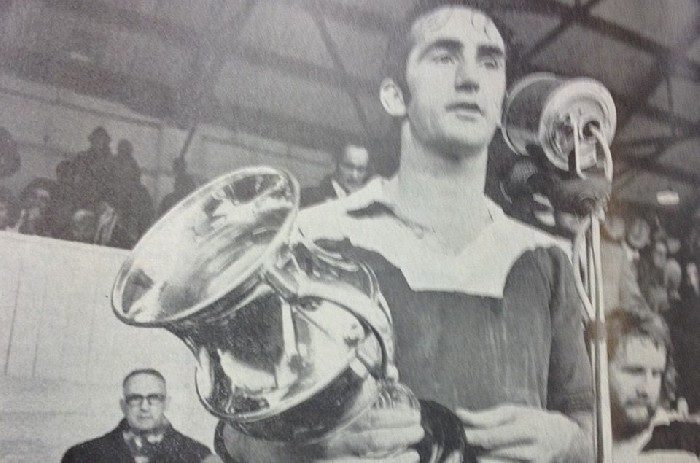 Above: Andy Leslie holds the Jubilee Cup trophy aloft for Petone in 1974, the year he first made the All Blacks.

In 2008, Andy Leslie enjoyed a sumptuous lunch at Millennium Stadium in Cardiff as President of the New Zealand Rugby Football Union. In 1974 on the same ground (then named Cardiff Arms Park), Leslie was told to “bugger off” by an officious groundsman.

Leslie was All Black captain and was inspecting the field ahead of the All Blacks clash against the Welsh XV. The Welsh XV, effectively a Test side, was tamed 12-3 following a memorable try scored by Ian Kirkpatrick.

Leslie recalls, “It hit me that day [in 2008] how much the game of rugby has impacted my life. It was so flattering to return to a special ground and share great memories of beating the Welsh.”

Ironically football was Leslie’s father’s passion, Andy Senior playing professionally for Hibernian in Scotland. The centre-forward was capped six times by the All Whites; they scored 2 goals and conceded 51 in the pioneering days of New Zealand soccer.

Andy junior took up rugby at primary school, but the first sport he represented New Zealand in was water polo at a Colts level.

In 1966, Leslie was selected for the New Zealand softball team that competed at the World Championships in Mexico. New Zealand finished a credible third in horrid conditions.

“I enjoyed that trip, but it was tough because we all suffered from diarrhoea,” Leslie says. “The local water supply was so dirty that we restored to cleaning our teeth with Coca-Cola.”

In 1968, Leslie was picked for the New Zealand basketball team for a cancelled tour of China.

In rugby he made steady progress at the Petone club under the guidance of an early mentor Don McIntosh – an All Black flanker who was the first man to play a century of games for Wellington.

Leslie recalls McIntosh’s influence: “I have always been a loose forward, but Don played me at prop in my first senior game. I got dropped for the next one. Don taught me that I had to work harder. I idolised the bloke. I had a scrapbook dedicated to him.”

Leslie made his Wellington debut in 1967 and played 144 games. Of all the games he played for Wellington he says the most memorable one was in 1971, against the British Lions:

“We got beaten 47-3, the Lions were unbelievable. I remember tackling Mike Gibson in one corner and John Bevan had scored in the other. Before the game I told our winger John Kupu that Bevan was the only runner. Bevan scored four tries that day.”

Leslie admits the Lions drubbing was a great learning curve.

“At both Petone and Wellington we started to approach the game more like the Lions. We moved the ball more and that created more enjoyment and success.”

Petone won eight Jubilee Cups in 10 years. In 1974, Wellington captured the Ranfurly Shield.
Under the coaching of Ian Upston, Petone won 172 out of 192 games. Upston later coached Wellington to two National Provincial titles. ‘Uppy’, as he was affectionately known, was a huge influence.

“I have been really lucky to have had some brilliant coaches. ‘Uppy’ just understood people. He was a great selector and knew when to say the right things. Bill Freeman was great coach. He was a great teacher of skills and had an outstanding grasp of strategy.”

Despite all the domestic success national honours remained elusive for Leslie until 1974. Aged 29 he was finally picked for the All Blacks and, after a record 96 consecutive games for Wellington, appointed captain.

“I enjoyed the All Black trials because they were a free lunch,” Leslie says. “The 1974 team to tour Australia was announced underneath the grandstand at Athletic Park. When they called my initials, AR, I thought they meant Alan Robert Sutherland.”

The first of three Test matches against Australia was won 11-6 in Sydney. Ian Kirkpatrick, the man who Leslie replaced as captain, scored a late try to seal victory. There was never any animosity between the pair, but this game started Leslie’s long struggle with referees in international rugby.

“Roger Vanderfield was the referee for the first Test. Before the game he said don’t hesitate to ask me anything. In the first minute we were penalised in a lineout. I asked Roger, ‘What was that for?’ He told me to piss off!”

Leslie scored his only Test try in the second match. The All Blacks surged 16-6 ahead midway through the second-half. However Australia rallied and tries by John Hipwell and Laurie Monaghan earned the Wallabies a 16-all draw. Interestingly Owen Stephens, who played for the All Blacks against France in 1968, made a break to spark Australia’s revival in Brisbane.

In the deciding Test New Zealand scored a resounding 16-6 victory.

“Australian rugby had been struggling for a long time,” Leslie recalls. “We were given an allowance of $2.50 a week, a jug of beer at the after match function cost $2.50. Every second game was effectively a Test match as New South Wales and Queensland stacked their teams. I remember coming across Ray Price a few times. He was a magnificent player.”

In 1974, the All Blacks were unbeaten in 21 games and scored more than 100 tries. On the tour of the United Kingdom, Joe Karam scored all 15 points in the Irish centenary Test triumph, and the Barbarians – featuring the entire British Lions forward pack that had toured South African undefeated – were held to a 13-all draw.

“We probably should have won that game,” says Leslie, who scored a try in the game. “Mervyn Davies scored a late-minute try to steal a draw. Many of us thought we had won. Grant Batty shaved his moustache off in the bath afterwards. He had promised to if we won.”

1975 was a quiet year with only a single Test against Scotland. Leslie is adamant if the All Blacks had a busier schedule they would have become a truly great team.

“We beat Scotland 24-0 in the ‘water polo Test’. We scored four tries in atrocious conditions against a fairly useful Scottish side.

“J.J. Stewart was a magnificent coach. He had built a really strong team, but we lost some key players ahead of the South African tour in 76 because we didn’t play enough rugby.”

The 1976 tour of South Africa was heart-breaking experience for Leslie. Missed chances and referee Gert Bezuidenhout prevented the All Blacks from winning a close series, in which they outscored the Springboks five tries to four.

“There was one where the ball hit the post and spun the wrong way. I got a telegram from a Petone mate who said: ‘The trouble with you Leslie is that your head is too bloody big to get between the posts.’

“Later I was ruled offside from a maul; despite the fact I was behind seven forwards.”

“Dawie Snyman snapped a drop kick that clearly missed. The black supporters behind the goal posts cheered wildly and the referee awarded a goal.”

In the final Test South Africa prevailed 15-14 to claim the series 3-1. Springbok fullback Ian Robertson infamously obstructed All Black centre Bruce Robertson in what Leslie claims was a “clear case for a penalty try”.

Sid Going had a penalty attempt disallowed after the ball blew off the tee. In the last minute All Black prop Billy Bush was penalised for obstructing in the lineouts. South Africa had been lifting (then forbidden) all game, but that didn’t matter as Gerald Bosch stepped forward and kicking the winning penalty.

Leslie says, “The NZRFU made a mistake in not selecting a neutral referee, but I don’t want to sound bitter about it. It hurt to lose the series, but the Springboks deserve some credit. They were a big side; their halfback was bigger than all of us. They were well led by Morn? du Plessis, who was a magnificent player and is a great friend.”

Controversy even followed the All Blacks on the return trip home. Leslie explains how the hard-earned duty free was purchased:

“We stopped over in Sydney in our All Black blazers and there were a whole lot of protesters at the airport. We decided to stay on the plane and sent commentator Keith Quinn to get the booze.”

Leslie retired at the end of 1976. He played 34 games and 10 Tests for the All Blacks – all of them as captain. He has remained actively involved in the game, coaching Wellington between 1990 and 1992. He then served as WRFU President in 2003 and became a life member in 2008. He also coached the Garryowen Club in Ireland and was president of the NZRFU.

Leslie’s sons, John (23 Tests) and Martin (37 Tests) played for Scotland. Was there any resentment that they were not selected for the All Blacks?

“John should have been an All Black and Josh Kronfeld always said that Martin was one of the toughest players he marked,” Lesile says.

“I am proud of what my boys achieved. I think they helped lift the standard of Scottish rugby. John was captain when they won the last Five Nations in 1999. John holds the world record for the fastest Test try against Wales at Murrayfield. I reckon the Leslies were the only ones who saw it, everybody else was still taking their seats.”

On the modern game Leslie says he is sick of “former halfbacks telling props how to scrummage”, but does concede he would have enjoyed the chances that the modern player enjoys.

Leslie says he would have carried on playing for as long as his body allowed him, as he loves the characters and camaraderie of the game. Leslie recalls the story of Wellington Club halfback ‘Charlie Chaplin':

“We shared a few drinks in the clubrooms after a game between Wellington and Petone. Charlie’s wife came to pick him up. As they were driving down the steep driveway at Hataitai Park the car got a puncture.

“Charlie got out to investigate and passed out on the grass. Charlie’s wife drove off on three tyres and left Charlie prone. After a while concern mounted for the prone man so we called the police thinking there had been a death. The police arrived and the sergeant who got out of the car was the lock forward who played for Wellington in the same game.

“Charlie was carried into the car and the police intercom asked the Sergeant. ‘Have you got the drunken fellow?’ The man on the intercom also played with Charlie in the same game.”