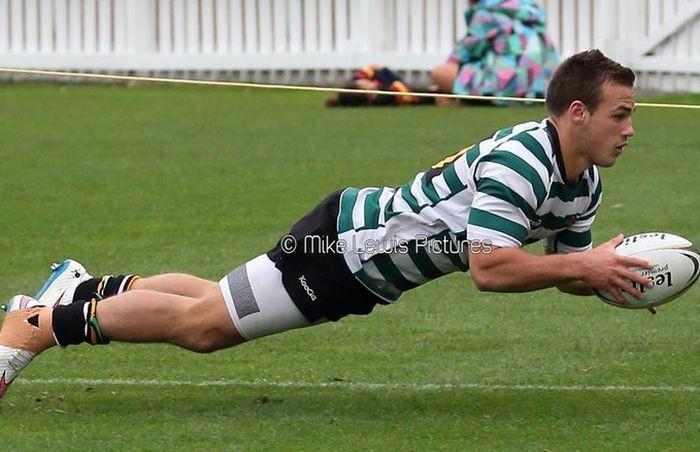 Above: Wes Goosen in familiar pose, diving to score a try in a recent match for Old Boys University

Goosen spent most of that season injured. In a pre-season fixture against Napier Boys' High School (at the same venue) he broke his finger and suffered a stress fracture in his back.

Goosen recalls the end of the final was anything but steady.

"It was a shambles; all we had to do was kick the ball out. Our halfback passed it to nobody and then our fullback kicked the ball backwards, it eventually went out and we won."

Goosen was selected for the New Zealand Secondary Schools' and scored a try in the 17-16 victory over Australia.

"Wellington College made me the person I am today," Goosen says.

"I learned so much about the game and people there. The culture was great, the coaching was great. I am really proud of my association with the school."

Goosen was born in East London, South Africa. He relocated to New Zealand when he was four years old. His mother Kim is an accountant and his father Alan a solicitor. Older brother Matthew is a student and plays for the Axemen.

In 2014 Goosen played six games for Old Boys University and scored two tries. He says the highlight of that season however was the Wellington Under-19's national success.

"That was the best experience of my life. The culture in that team was awesome. Clayton McMillan is a great coach," he says.

Goosen's impressive age-group form earned him a place in the New Zealand Under-20's team that toured Australia in May. Goosen was bitterly disappointed to miss the final cut for the IRB Junior World Championships in Italy.

"I scored a try and was told I played well in the Samoa game, which is the only game I played on tour. It hurt to miss the squad because it was my last chance to make it, but I have moved on," Goosen insists.

Goosen has played 14 games for Old Boys University this season and scored 11 tries.
The Billy Goats only made the Jubilee Cup after earning two points on appeal against Tawa.

OBU lost to Tawa 35-29 in a heated Round five Swindale Shield encounter at Lyndhurst Park.

In the 64th minute of that match Fili Tusani, a reserve hooker, came on for Tawa as the last fit front row reserve. He was listed as a hooker but Tawa claimed he could not safely prop up a Premier scrum. Under uncontested scrums Tawa hung on to win. Goosen scored two tries and recalls the drama.

"Basically we smashed their front row and the game went to golden oldies which was disappointing. Our front row has been a huge part of our success this season. Guys like Finbarr Kerr-Newell and Joe Beech have been immense,” he says.

The constant improvement of the front row, team chemistry and resolute defence are the key ingredients Goosen identifies for the Billy Goats run to the Jubilee Cup final.

They have won eight games in a row and have the best attacking and defensive record in the competition. Goosen scored a try in the 26-20 win against Tawa, but he says the toughest game was against final opponents Marist St Pat’s.

"There wasn't a lot in it. They are a really physical side who are well-balanced across the park. Saturday will come down to accuracy. The team that makes the least mistakes will win."

Sam Chamberlain was accurate in Saturday's semi-final against Oriental Rongotai. He only missed one kick in his haul of 15 points. His opposite goal kicker James Proctor kicked one goal from seven attempts. Goosen recalls the final moments of the game.

"Ories was hot on attack when Mitch Clark and I made a tackle. Mitch was penalised for not releasing the tackled player and we were distraught.

“The referee kept moving towards the sideline and I was thinking keep on going, keep on going. Eventually he stopped a few metres in from touch and about 40-metres out. I couldn't watch the kick. When he kicked it I wasn't sure if he would get it. When it missed I was so relieved and happy."

In 2002, the year that OBU previously made the Jubilee Cup final, Paku scored a sensational last-second try against Ories in the their last round-robin match to give them a 21-19 win and book a berth in the following week's semi-finals.

Paku's try that day saw them leapfrog Ories into third place and the following Friday night they beat Poneke in their semi-final at Westpac Stadium. Top qualifier MSP went on to beat Ories in the other, setting up a MSP-OBU final. MSP won this final two tries to one, 18-10 and OBU haven't reached that far since.

Goosen says Mitch Clark is one to keep one eye on in the final. The openside flanker from Kapiti College will play his 22nd game for the club. He has represented New Zealand Universities and scored six tries this season.

Goosen played one match for the Wellington Lions in last year's ITM Cup, appearing in the first match against Waikato.